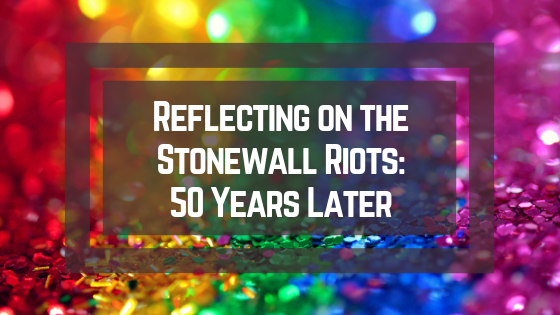 With the passing of Pride Month this year, we took time and space to reflect on the legacy of the Stonewall Riots. On June 28, 1969, a New York City police raid targeted Stonewall Inn of Greenwich Village--one of few establishments catering to members of the LGBTQ community, including homeless youth, sex workers, and other marginalized groups. In the midst of institutionalized homophobia, this incident spurred a wave of demonstrations advocating for the rights of lesbian, gay, bisexual, transgender, and queer individuals. Influential activist leaders, including Marsha P. Johnson and Sylvia Rivera, sparked a broader movement of gay pride marches and demonstrations in major cities worldwide.

What does this have to do with where we are in 2019? According to Human Rights Campaign’s reported figures, anti-transgender violence is still on the rise, with Black transgender women at disproportionately higher risk for murder. The Black transgender women we have lost to homicide in this calendar year alone include Dana Martin, Jazzaline Ware, Ashanti Carmon, Claire Legato, Muhlaysia Booker, Paris Cameron, Chynal Lindsey, Chanel Scurlock, Zoe Spears, and Brooklyn Lindsey. In addition to fatal violence, transgender women of color--especially Black women--face greater difficulty accessing basic needs, such as employment, housing, and medical care.

This history, along with many narratives of marginalized communities, is too often omitted from “mainstream” American history. By including LGBTQ history, themes, and people in curriculum, schools offer opportunities for students to gain a more nuanced understanding of the world around them, while also encouraging respectful behavior and critical thinking. GLSEN offers a wide selection of lesson plans and other resources to acknowledge this content and incorporate it into standards-aligned units.

While not exclusive to transgender students, Black girls experience both misogyny and racism in school systems each day. This distinct form of misogynoir results in Black female students experiencing increased disciplinary action for simply existing in predominantly white spaces. On average, Black girls are suspended six times more often than white girls. Although Black girls are just 16 percent of the female student population in the US, Black girls account for one out of every three female arrests on school grounds. Meanwhile, criminal justice reports found that between 2000 and 2014, women facing incarceration increased by 700 percent, and Black women are imprisoned at twice the rate of their white counterparts. Essentially, we need to dismantle the conditions that foster a school-to-prison pipeline among Black girls labeled as “bad kids” early on.

As school leaders, this may require some deep-seeded excavation of the status quo with regard to school policies. Consider how your school community sets guidelines on access to gender-segregated activities and facilities, or what language is used to define appropriate hair and clothing styles. Additionally, schools need to consider what systems are in place to protect student safety and privacy, alongside training and procedures for faculty and staff responding to incidents of harassment and bullying. To continue these conversations among your team of educators, we’ve linked some policy guides from the National Center for Transgender Equality, along with additional guidance from the ACLU, Gender Spectrum, HRC, and NCLR for K-12 settings. We encourage folks to bookmark resources linked in this post throughout the remaining 11 months of each year, as we create educational spaces that are inclusive and welcoming.

As we approach the 4th of July, celebrating the independence of the United States, I invite you all to honor those who came before us fighting for freedoms that include LGBTQ rights alongside many intertwined, ongoing fights for human dignity.